When the trailer of Paramount Picture’s Top Gun: Maverick, the sequel of the (1986) Top Gun released in December 2019, Akshay Sharma was spellbound – fighter jets speeding up in the clear blue sky, scenes of an undercover-esque airbase and trainee pilots learning the art of flying.

Sharma, being a licensed hobby pilot and admirer of the legendary Tom Cruise, wished to be a part of the movie, one way or another. “It was more like a fantasy in my head and in the sheer excitement I ended up making a Top Gun inspired fan art piece for my home.” With a little more research, Sharma managed to connect with the CEO of Paramount’s India office. Soon after, Sharma was pitching his idea of special Top Gun propellers to the company’s headquarter in Los Angeles.

“I was informed that Tom Cruise is personally involved in any decisions regarding his movie,” so he waited for almost 11 months to finally get approval and license to make exclusive Top Gun propellers.

These Top Gun propellers have never been done before and this is the first time an aviation décor brand in India has been accorded global rights by Paramount Pictures. Sharma initially thought this was just a shot in the dark. “But I had nothing to lose, so I had to give it a try!”

Founded in 2015, WoodFeather specialises in handcrafting wooden propellers as one-of-a-kind, bespoke home décor pieces. These look identical to a real plane’s propeller, which is a rotational set of blades that thrusts the motion of an aircraft. The brand uses a variety of teakwood, Burmese teakwood and mahogany to create the propellers. 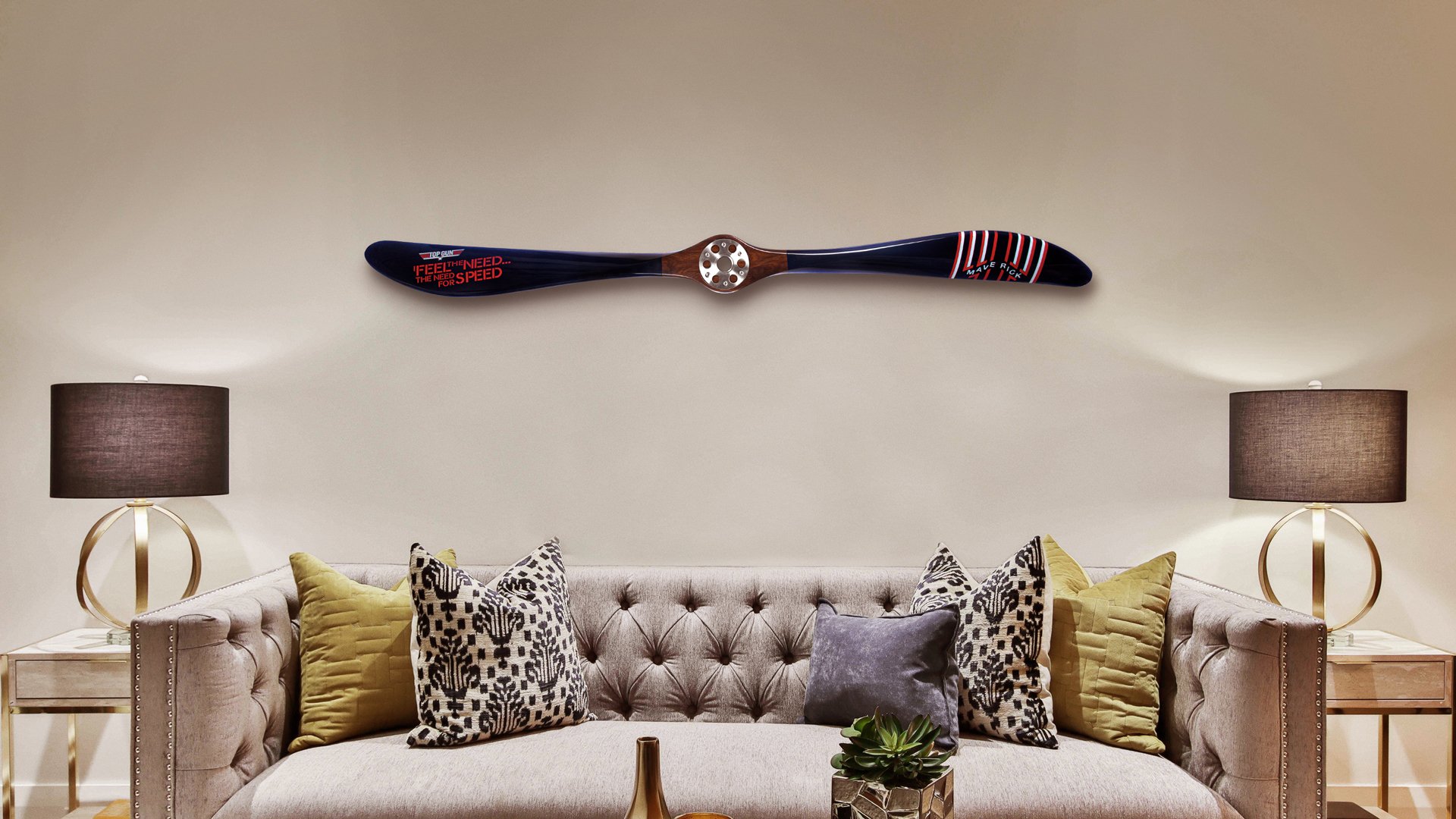 Made for the aviation geeks!

Whether a fan or a non-fan, people associate Top Gun with two things, the fighter jets and the characters in the movie. WoodFeather’s limited-edition Top Gun propellers are based on four designs. The first one is purely inspired by Tom Cruise’s leading character ‘Maverick’ and his helmet from the original 1986 movie, which still is iconic memorabilia. From its red, white and black colour palette and the striped pattern to Maverick’s catchphrase “Feel the need…the need for speed”, everything has been etched deftly on to the propeller’s canvas. 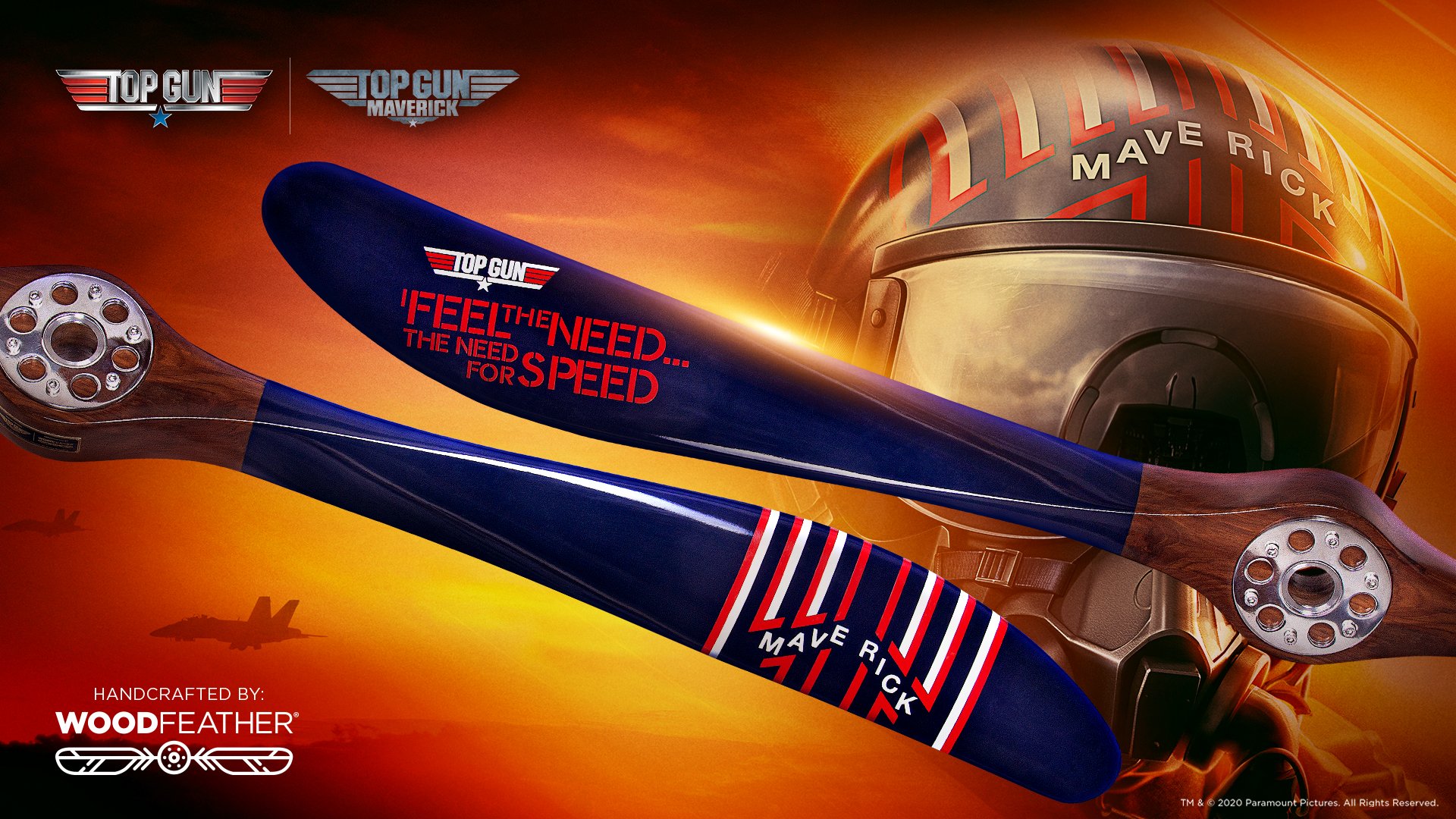 The second design captures the essence of all the eight fighter pilots in the movie, including Maverick. While the third and fourth propeller is inspired by the heavy-duty aircrafts seen flying in Top Gun franchise – the FA18 Super Hornet, the F14 Tomcat and the vintage P51 Mustang, which is owned by Cruise in real life too.

Designing a propeller involves choosing a theme, a colour scheme, logos, stickers and other elements like a text or a quote to be engraved on the piece. Finally, the décor piece becomes assimilation of a real aircraft, informs Sharma.

The inception of WoodFeather was a happy accident, says Sharma. When his eBay order of a propeller from the US was lost in transit during shipment, Sharma was left with no choice but to make one for himself for his new Mumbai home’s interior. “So, without any background in product design and woodwork, I set out to create a propeller.”

This random experiment turned out to be a success and visitors to his home started showing interest in propellers as a décor piece. It motivated him to learn wood carving and designing.

“I observed a decent demand for propellers and realised that I could dwell into this niche segment even more,” and that’s how WoodFeather was launched five years ago, as a niche aviation décor brand, tells Sharma.

Today’s younger generation and people in their 40s and 50s are not looking for conventional marble and glass artifacts. “There is a general shift in terms of letting go of the typical décor items and looking at more eclectic artifacts, which reflect a new kind of a trend.”

For somebody who hasn’t seen a propeller as a décor piece will certainly be stunned at the uniqueness and its mammoth size. Sharma also adds that anything connected to aviation, airplanes, or the sky automatically has an exquisite aura to it. So, an eye-catching propeller in a living room will definitely be a conversation starter next time you decide to deck it up on your wall.

Interestingly, around 70 per cent of WoodFeather’s clients are not personally connected to aviation. Some are luxury home dwellers or workspace professionals in need of something different, quirky and aesthetic. Sharma says that the solid teakwood used by the craftsmen for propellers is known for its durability and can become a family heirloom for generations. “So, I always insist my clients to personalise the piece with an engraved text, quote, number or a monogram so that it becomes a personal, unique piece and not an off-the-shelf item.”

Talking about vintage and one-of-a-kind, some people own propellers from the World War I era too. These are extremely expensive and even a broken piece of wood sells for Rs25 to 50 lakhs, informs Sharma. “The Royal Air Force Museum in London has wooden propellers with 1000 to 2000 bullet holes in them and they have a fascinating backstory of the war to it. The mere thought of it gives me goosebumps.”

The future is exclusive

On the work front, Sharma has had a fantastic run so far. “Because the business is not limited to how much we can sell but how much we can make.” Some of his clients even wait for their personalised pieces for three to four months.

Overall, it has been a conscious call for Sharma to not make his niche brand of aviation art a mainstream one. “We want it to be an exclusive and a discovery brand, and for clients to sit with me one-on-one to discuss how they want their propellers made.” 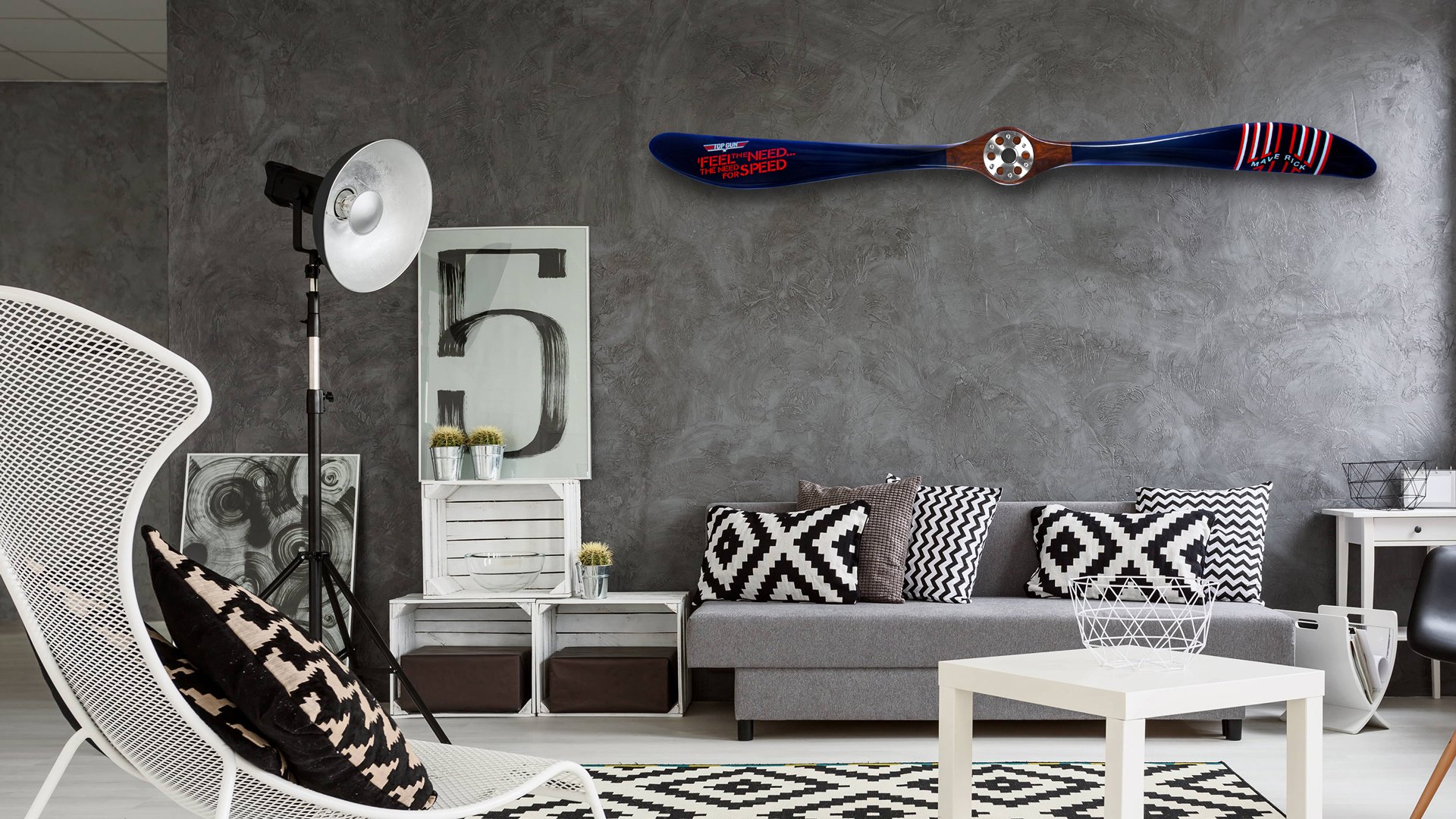 We also launch our collections and collaborations every year. In 2019, we teamed up with menswear designer Arjun Khanna to put together a show, where his models wore aviation-inspired clothes and had his new propellers on display.

Sharma likes to think that he’s hit the pinnacle by collaborating with Top Gun. But he does believe that this is the opportunity for WoodFeather to go global, in terms of brand identity and newer clients as people recognise Top Gun and Tom Cruise worldwide.

Check out the Top Gun:Maverick collection of propellers here

“I got a lot of flak for making celebs walk the ramp,” reveals designer Manish Malhotra

A nod to minimalism at Shantanu & Nikhil’s new flagship store

TV shows and books to curl up with on the weekend

A nod to minimalism at Shantanu & Nikhil’s new flagship store

TV shows and books to curl up with on the weekend

Lightyear 0: The first ever solar-panelled car